Probably the most important Formula 1 news in 2016 (so far) has been the promotion of Verstappen (a.k.a the demotion of Kyvat). Young Russian driver Daniil Kvyat made serious mistakes and put Vettel out of the race as he crashed him twice from behind. Despite the fact that he was voted as the Driver of the Day in China, his reckless behavior and bad performance in Russia made him lose his spot in Red Bull.

Red Bull finally gave the harsh but necessary (as they believe) verdict about Kvyat and swapped him with the youngest driver in Formula 1 Max Verstappen. Beginning from the Spanish Grand Prix, 18-year-old Belgian will be in Kvyat’s spot as the Russian will move to Toro Rosso. This move can seem harsh; however, both drivers will have the chance to prove their worth. 2016 Formula 1 Spanish Grand Prix betting odds have already been effected by this move immensely. If you are planning to bet on Formula 1 Spanish GP 2016, you should consider the fact that Kvyat’s odds will be worse than the previous races as Toro Rosso is not able to reach Red Bull’s level in any ways.

Rosberg’s Betting Odds Indicate His Superiority over Hamilton This Year

Another important note which has to be mentioned in the 2016 Formula 1 Spanish Grand Prix betting preview is that Mercedes driver Nico Rosberg won all the first four races of the season. It seems like he doesn’t have a match although Lewis Hamilton is expected to beat him at some point. The question is whether he can manage to finish the race in front of his team mate in Barcelona. Online sportsbooks offering Formula 1 betting have started to favor Rosberg slightly more than Hamilton already which is a different picture from the pre-season betting odds. 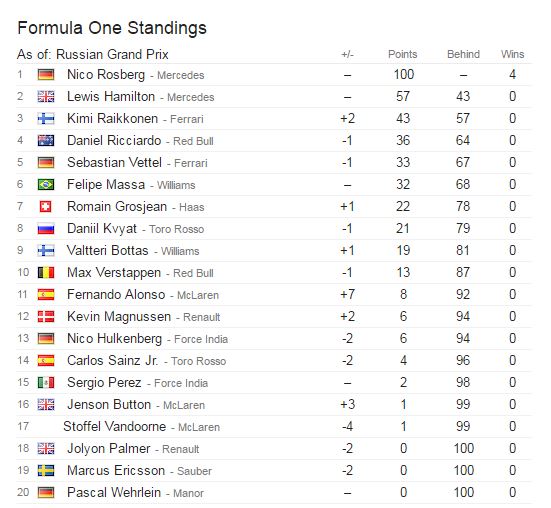 The Circuit de Barcelona-Catalunya has hosted every Spanish Grand Prix since 1991. Therefore, it is one of the most traditional circuits in Formula 1. The 4.655-km-long track was built on a hard surface and it is full high-speed corners. Therefore, drivers are expected to choose soft tyres in Barcelona-Catalunya. The hard surface will wear the tyres drastically; therefore Pirelli tyre performances and pit stop strategies will be determining factors in the Spanish Grand Prix.

Pirelli announced the tyre preferences of the drivers:

#PZero H make their 2016 debut at the #SpanishGP! Catch up on our last visit to #Montmelo: https://t.co/WpCSvNREj7 pic.twitter.com/z1PYkyB25B

According to online Spanish betting news, rain is expected throughout the Formula 1 weekend. It seems like an exciting weekend full of Formula 1 is waiting for us.

According to popular UK betting site bet365, Lewis Hamilton and Nico Rosberg have equal chances to carry Mercedes to glory in Spain with the odds 2.2. Ferrari’s Sebastian Vettel shouldn’t be underestimated as he follows the Mercedes drivers in the third place with odds 7.00. The other Ferrari driver Kimi Raikkonen’s odds are scaled at 19.00 while the new Red Bull, former Toro Rosso driver young Max Verstappen’s odds are 34.00. It seems like bet365 trusts the Belgian more than his team mate Daniel Ricciardo since they grant him the odds 41.00. It seems like we won’t be able to see Daniil Kvyat on the top 10 very often as he lost his spot in Red Bull. His odds to win the Spanish GP are 301.00.

If you want to bet on Formula 1 Spanish GP in the US, you can head to Mybookie and wager your bets on your favorite Formula 1 driver. According to Mybookie, Lewis Hamilton and Nico Rosberg have equal chances to win the race. There is an evens betting chance here. It means that your bet will be equal to your winning. For example, if you wager $50, your winnings will be equal to the money that you wager. The second driver favored by Mybookie is Sebastian Vettel whose odds are +550. Other Ferrari driver Kimi Raikkonen’s odds are +1600. Mybookie scales the Red Bull drivers Ricciardo and Verstappen in the same way as their odds to win the race a re +3300.

The best odds for Hamilton to win the race are provided by William Hill. His odds are 2.25. According to the UK sportsbook, Rosberg is one step ahead of his team mate before the fierce clash in Spain. The German’s odds are scaled at 2.1. As the other online sportsbooks claim that Vettel is expected to follow the Mercedes drivers. His odds to win the title are 7.00. The other Ferrari driver the Iceman Kimi Raikkonen’s odds are 17.00. William Hill believes that Verstappen is faster than Ricciardo. Therefore, the young driver’s odds to win the race are 34.00 while his new teammate’s odds are scaled at 67.00