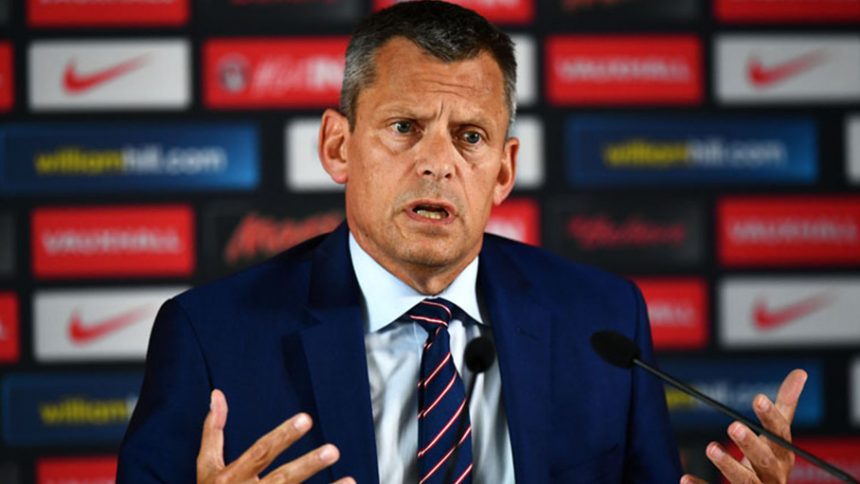 The FA boss Martin Glenn expressed his gratitude and appreciation for Roy Hodgson’s work during his four-year tenure as England manager which saw him lead the team through three major tournaments (Euro 2012, World Cup 2014 and Euro 2016). Now The FA is tasked with finding a new England boss that will begin his job with the qualifiers for the 2018 World Cup in Russia, and there quite a few interesting names on the betting list, per online sportsbook Paddy Power.

“I want to publicly thank Roy on behalf of The FA. He’s spent four years building a team and from the position he inherited it to the team today, it’s a much stronger team and a much stronger setup,” said The FA chief.

After Fabio Capello’s resignation in February 2012, Hodgson was appointed as the new England boss on May 1, 2012, which soon saw him lead the Three Lions through the Euro 2012 campaign where they were knocked out in the Quarter-Finals. He next guided England to the 2014 World Cup in Brazil, but this time they didn’t even reach the knock-out phase as they were sent back home with only 1 point from three games in their group.

In the qualifiers for the Euros in France this year, they performed outstandingly by beating all of their opponents under him and collecting the maximum amount of points, so naturally people had high expectations for England to go far in the tournament. They progressed through the group phase with somewhat difficulty, and were expected to overcome Iceland in the Round of 16 with ease. However, as it turned out they succumbed to a 2-1 defeat against a side that doesn’t have a fraction of experience at international tournaments as England do, which prompted Hodgson to immediately hand in his resignation. Had the Three Lions lost to a side that is deemed a major football force (Spain, Germany, France, Italy, etc), the perception of the defeat would have probably been very different.

The FA chief says new England boss could be either English or foreign
(Video credit: The FA)

“Roy, Iceland is not your epitaph or legacy, there’s a lot to be grateful for what your team have done,” said The FA chief exec. “It think it’s also important to call out Roy’s tremendous integrity. He’s a man of great honour, the manner in which Roy chose to step down is in very positive contrast to what has happened with previous England manager and it’s a mark of the man.”

When asked about the selection process of the new England boss and whether he will be English or foreign for that matter, Martin Glenn responded, “We’ll be looking for the best person for the job.” When pressed further by a reporter to elaborate The FA’s preferences, Glenn stressed, “I’m not going to talk about names today…we will have the best people that will take this exciting group of players with potential further forward. We’re looking for the best person, not necessarily for the best Englishman.”

Current England Under-21 manager Gareth Southgate has emerged as the favourite to become the next boss of the first team right after Hodgson resigned, however now he’s been pushed down the pecking order with odds of 11.00 (10/1), per online sportsbook Paddy Power. USA manager Jurgen Klinsmann is now the favourite 7.50 (13/2), after rumours emerged linking him to the job, while Glenn Hoddle is second in the running 8.00 (7/1) to take over the Three Lions. Sam Allardyce is third favourites to land the coveted job, while long-time Arsenal manager Arsene Wenger sits in fifth spot 13.00 (12/1) to become the new England boss, per online sportsbook odds.