You are here: Home /  Soccer News /  Sports News /  Innovative Tottenham New Stadium to Open its Doors in 2018 with All-Year Round Activities
Soccer News 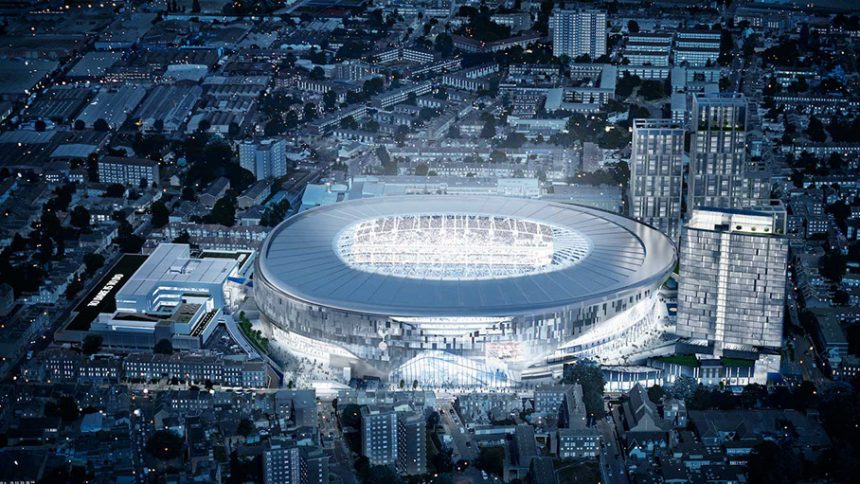 The North London club boast a capacity of 61,000 in the Tottenham new stadium.

Tottenham New Stadium – the Northumberland Development Project (NDP) – will replace the 36,000 capacity White Hart Lane once it’s complete in 2018. This will see the club experience a staggering increase of 25,000 additional supporters rushing through the doors every Spurs matchday.

What’s bound to be even more impressive is that the southern stand of the Tottenham new stadium will have a 17,000 single tier, which will essentially serve as a ‘wall of sound’ – akin to Borussia Dortmund’s south stand known as the ‘yellow wall’ which features over 24,000 supporters on a regular basis.

(Find out more about the Tottenham new stadium by clicking HERE.)

Daniel Levy, the Chairman of the club, highlighted the significant impact the new ground will have on the local community, by offering a range of entertainment services for everyone – Spurs’ supporters, as well as civilians.

“Our stunning new stadium design and wider scheme will deliver an unrivalled fan experience and significant community benefits – creating a world class sports and entertainment destination for all – and in our birthplace of Tottenham,” said the Tottenham Chairman. “It will be our new home for generations to come and we want it to be exceptional.”

The project for the Tottenham new stadium has been in development since 2007, with the club shifting back and forth between plans before settling on the Northumberland Development Project.

If I would make an educated guess, I would say that some portion of the transfer funds generated from Bale’s £85 million move to Real Madrid in 2013 have been invested in this project to realize the Tottenham new stadium.

Being the shrewd businessman that he is, Daniel Levy has made provisions to ensure Tottenham new stadium gets out the maximum value possible from the project that is set to cost around £750 million once complete, according to BBC.

The Chairman has already secured a 10-year partnership with the NFL (National Football League), which will see the American football league host at least two matches every year at the Tottenham new stadium. Furthermore, Levy may be looking at commercial options to sell the naming rights of the new ground, in order to offset the significant cost of the NDP.

Spurs have made strides in the Premier League in recent seasons, as they finished third on the table (71 pts) last campaign, while at the moment they’re in second position (45 pts), only behind leaders Chelsea. Taking into consideration the crop of players at Pochettino’s disposal, they could mount a title charge, if they manage to build on their impressive performances and also strengthen in the current winter transfer window.

Back Tottenham with Unibet Sports!

Bet on the upcoming Man City v Tottenham match for a chance to scoop €20 Free Bet!

(Check out Unibet Sports Review at Betting Herald for more info about the online sportsbook.)