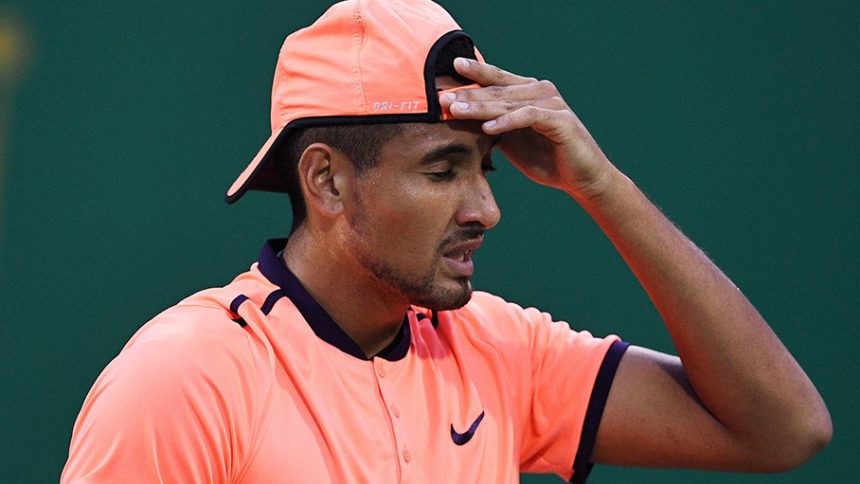 World’s No. 14 Nick Kyrgios suspended for eight tournament weeks but could be reduced if he agrees to a ‘plan of care.’

As a result of his performances at the Shanghai Masters last week, Kyrgios initially received $16,500, but in the meantime the ATP decided to hand him an additional penalty of $25,000 on top of a suspension of eight weeks from competitive play. After the 6-3, 6-1 loss to Mischa Zverev at the tournament, the 21-year-old has expressed his indifference towards fans and the audience by saying “I don’t owe you anything. (It) doesn’t affect how I sleep at night,” for his lack of effort last week.

“Kyrgios has been found to have committed the player major offense ‘Conduct Contrary to the Integrity of the Game,” ATP’s statement reads. “The offense means that Kyrgios receives an additional fine of $25,000, and is suspended from ATP tournaments for eight tournament weeks, effective from today through to Sunday 15 January 2017.”

Should Kyrgios seek professional help from a psychologist, his suspension could be reduced to three tournament weeks. This could see him return to action on November 7, in time to compete in the ATP World Tour or the Challenger Tour.

(For more info about the online sportsbook, check out Paddy Power Sports Review – it offers some daily sportsbook bonuses so don’t miss out any hot deal!)

Kyrgios expressed his apology for his effortless performances in Shanghai last week, which he attributes down to feeling fatigue following his victorious run in Tokyo, while the constant travel made things even worse for the young Australian.

“Following the ATP’s decision I would like to take this opportunity to apologize again for the circumstances in Shanghai,” said the world’s No. 14. “The reason has been a long one as I battled several injuries and other challenges towards the end of the summer. The Asian circuit was particularly tough after the long week and win in Tokyo and with the travel throughout the continent, my body finally just gave out in Shanghai both physically and mentally.”

“I do understand and respect the decision by the ATP and I will use this time off to improve on and off the court. I am truly sorry and I look forward to returning in 2017.”

But luckily for him, he has nearly $3.6 million from prize money (not including sponsorships) at his disposal to get the right kind of help he needs. I reckon a hot bath and a good night’s sleep would do wonders for recuperation for the common folk, but when you’re 21 and are getting paid six-seven figure deals to globetrot tournaments and hit green balls that have an unusual urine-like scent, I guess it can be tiresome at times. Poor lad, right?