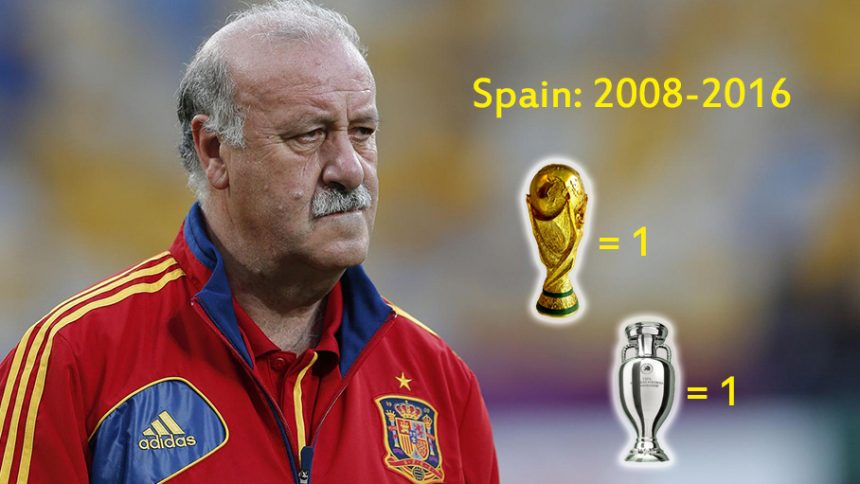 After eight years in charge of La Roja, Vicente del Bosque resigns from his position as Spain boss.

The former Real Madrid manager has decided to step down as the head of the Spanish national team, following his country’s 2-0 defeat to Italy in the Round of 16 at the Euros on Monday evening. Del Bosque resigns after guiding Spain to a World Cup and European Championship triumph in 2010 and 2012 respectively, however the last two tournaments have seen La Roja crash out before reaching the latter stages of the competitions.

The 65-year-old announced his resignation on Spanish radio station Radiogaceta Sports on Thursday night – three days after suffering the last 16 loss to Italy – according to The Guardian. He stressed that he made the decision to leave La Roja regardless of the outcome for Spain at the Euros – win or lose – as he made plans to retire sometime prior.

“Without a doubt, I have no intention to remain as coach, but you have to be discreet. No matter what the result of the Euros, I had no doubt about what my future would be,” said the World Cup and Euro champion. “I have handled this issue discreetly. But it is a decision that was taken in advance.”

“On July 31 I will leave football. I will be available to help,” said del Bosque. “I will leave the bench although I will always remain close and will want things to go well for Spanish football. If I can help in anything, I will.”

Del Bosque resigns as the manager of Spain after eight years and 114 games in charge, having won an impressive 87 matches, while suffering only 10 draws and 17 losses. This brings his winning percentage to a whopping 76.32%, which is among the highest in all of football for long-time serving managers.

France are the favourites 3.75 (11/4) to win the tournament on home soil, while World Cup champions Germany are second 4.00 (3/1) in the running, per online sportsbook Paddy Power. After progressing to the Semi-Finals of the Euros by defeating Poland on penalties, Portugal are now third favourites 5.50 (9/2) to win the coveted Henri Delaunay trophy, while Belgium maintain the same odds 5.50 (9/2).

Italy are next on the list of potential champions 7.00 (6/1), while Wales 23.00 (22/1) and Iceland 41.00 (40/1) are outsiders for the trophy, per online sportsbook odds. We don’t see Portugal winning the tournament, considering the way they’ve played, however France or Germany could very well end up reaching the final and clinch the trophy.