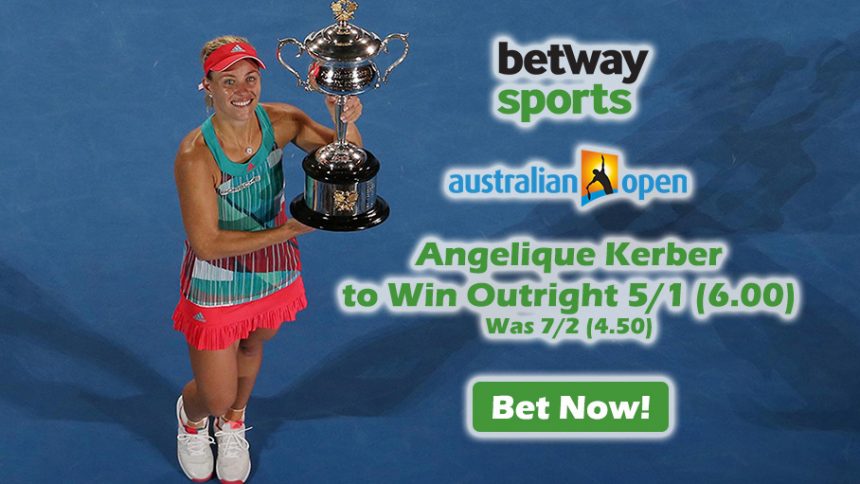 Earn yourself a tidy sum with this limited time offer: Australian Open Price Boost 5/1 (6.00) for Kerber to defend the Aussie title she won last year.

The odds for Kerber used to be 7/2 (4.50), but Betway Sports decided to activate the Australian Open Price Boost 5/1 (6.00) to give you a chance to maximize your earnings on the first major tennis event of the new year. If you’re a tennis nut and have to place a bet on every major event, then this is your chance to collect sizeable winnings with the Australian Open Price Boost.

NOTE: Betway’s Australian Open Price Boost is a limited time offer, so make sure you place a bet on the German tennis star before 23:00 GET, this Sunday (January 15). The tournament commences the following day (January 16), and this special market will be closed once it starts.

(Take a look at Betting Herald’s Betway Sports Review for more info about the online sportsbook – it features some of the best sports markets and enticing sportsbook bonuses.)

Kerber enjoyed fairy tale-like success in 2016 by tasting her first piece of silverware in a career that started back in 2003. At the start of the season she won the Australian Open – her first of two major trophies in 2016 – after defeating Serena Williams 6-4, 3-6, 6-4 in the final, however she’s still ranked as second-favourite behind the American for this year’s tournament. But we’re certain Kerber can pull it off once again; that’s why Betway has decided to offer the limited time deal on her to clinch the title with Australian Open Price Boost 5/1 (6.00).

After overcoming Williams in the ‘Land Down Under’ the German managed to get all the way to the final of Wimbledon, where she yet again faced then world’s No.1. However, Williams proved to be too much of a challenge for Kerber this time around, as the American won the final match 5-7, 3-6. Despite losing, Kerber didn’t allow herself to get sidetracked. At the final major tournament of the year – the US Open – the 28-year-old defeated Czech star Karolina Pliskova 6-3, 4-6, 6-4 to lift her second trophy of both the year and her career.

Profit from Betway’s Australian Open Price Boost before 23:00 GET, January 15!

Taking into account the US Open was held merely a few months ago (August 29 – September 11), Kerber will be looking to build on her fine form that saw her clinch the US Open title last year and bring that same level of momentum into the first major event of 2017.

Get in on the action with Betway Sports; place a wager on Angelique Kerber to win the tournament outright 5/1 (6.00) with Australian Open Price Boost!