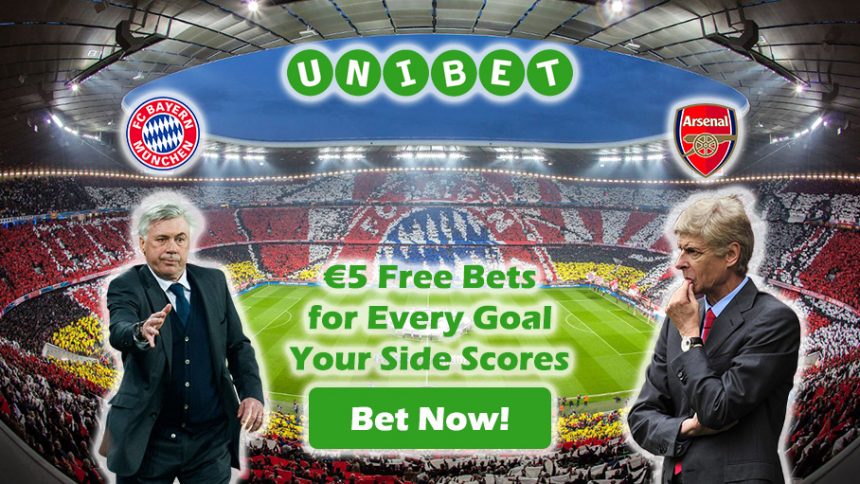 Win €5 Champions League Free Bets Every Time Your Side Scores

Unibet Sports is dishing out €5 Champions League Free Bets with every bagged goal by your backed side in the Bayern Munich v Arsenal encounter in the round of 16.

Note: the match at the Allianz Arena begins tonight at 20:45 CET, so make sure to opt-in and place your wagers before kick-off to get your Champions League Free Bets.

Carlo Ancelotti’s men are strong favourites to win the first round, as they’re viewed as the far superior side that boasts the likes of Lewandowski, Muller, Vidal, Hummels, Lahm, Neuer and other stars. The great thing about Unibet’s Champions League Free Bets is that your dilemma on whom to bet on has been settled, in case you couldn’t make up your mind. It doesn’t matter what club wins the match tonight, as long as they find the back of the net against each other, and the more, the better it stand to be for you.

Ahead of the clash with Die Roten, Wenger has announced that David Ospina will start the game instead of the regular goalkeeper Petr Cech, as the former was the one that actually helped them reach the last 16 tie with his impressive performances in the group stages of Europe’s elite competition.

“I have nothing to hide there, it will be Ospina because of the quality of his performances,” commented Wenger. “We are in the last 16 and finished top of the group. If you analyse his performances in every single game we are where we are because of his great performances.”

Whichever way the game goes at the Allianz Arena, we’re sure it’ll be a match with goals galore, considering the firepower both teams boast in their squads!

If you haven’t already done so, this is your chance to create an account with Unibet Sports and seize the opportunity for the Champions League round of 16 encounter. Bet on Bayern Munich v Arsenal before the game, and then reap the benefits with the €5 Champions League Free Bets for every goal that is struck behind the net by your side.