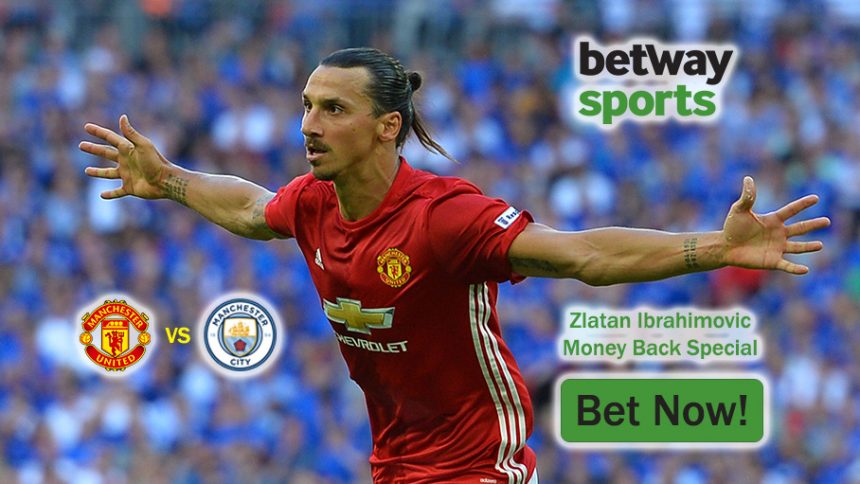 Goalscorer Money Back Offer: Get up to £25 if Ibrahimovic Scores Against Man City

Insure your bets on Man United vs Man City match with Betway’s Goalscorer Money Back Offer!

Place a £5 wager (or more) on the Correct Score or Goalscorer market for Man United vs Man City, and if the imposing Swede finds the back of the net during the 90 minutes, you’ll receive a refund up to £25 in Free Bet! You can’t lose money with the Goalscorer Money Back Offer; you’ll either win or get a refund in Free Bets!

Make sure you place your bets before the game starts tomorrow at 12:30 BST (September 10)!

(Take a look at Betting Herald’s Betway Sports Review for more info about the online sportsbook.)

Man United are the favourites 2.30 (13/10) to win the derby, while their noisy neighbours Man City have been dealt underdog chances 3.25 (9/4). A tie between the two stands at 3.25 (9/4). The two sides have met each other on 171 occasions until this point, with Man United leading the way with 71 victories over Man City’s 49. The rest of the 51 encounters ended in draws. Bet now with Goalscorer Money Back Offer!

Ahead of the highly-anticipated game, Ibrahimovic lavished praise on the Man United boss, who previously managed him at Inter for one year before the Swede opted for a move to Barcelona in the summer of 2009.

“Mourinho is a mastermind. He knows everything about the game,” said the 34-year-old striker, before confessing his wishes he had worked with the Portuguese boss for a longer spell. “I do not have many regrets, but I do regret that I did not get to play under Mourinho for longer. When the opportunity came again for him to be my coach at United it was an easy decision.”

“Who wouldn’t want to be coached by him? I am at a great club with a great coach and great fans and I want to be as successful as possible for them.”

Ibrahimovic has made a perfect start to his career at Old Trafford by scoring three goals in his first three appearances in the Premier League, and also another one in the Community Shield. But now he’s gearing up to face his former manager Pep Guardiola, who’s in charge of the Sky Blues – the man he notoriously fell out with during his single season with Barcelona in 2009/10.

“These games always mean so much to the fans and we want to win for them, but the players must always be focused. Every game must be looked at as an opportunity to win three points whoever (is) the opposition,” stressed the

Insure your bets on the Manchester derby tomorrow with Goalscorer Money Back  Offer and collect up to £25 in Free Bets!

Grab up to £25 with Goalscorer Money Back Offer!