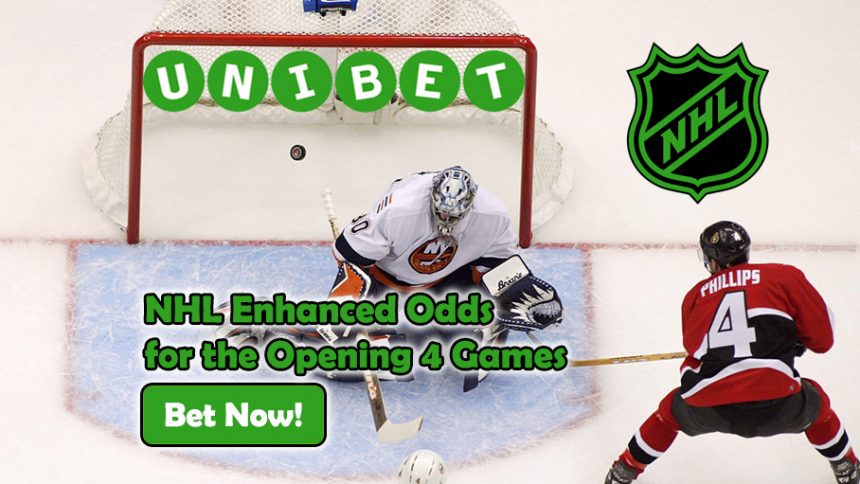 NHL Enhanced Odds: Take Advantage of Boosted Price for the Opening Night of the NHL

Make the most of the opening games in the new season with NHL Enhanced Odds.

Unibet dishes out Price Boosts for the first four games of the 2016/17 campaign; opt-in now and take advantage of the NHL Enhanced Odds for the home teams:

There’s not much time left until the season gets underway, so don’t stand on ceremony! Bet on the four matches with NHL Enhanced Odds before October 13 to maximize your earnings!

(For more details about the online sportsbook, take a look at Betting Herald’s Unibet Sports Review – it boasts some of the most diverse betting options and rewarding sportsbook bonuses.)

Last season, the Pittsburgh Penguins defeated the San Jose Sharks four games to two which saw them win their fourth Stanley Cup in the team’s history, after back-to-back victories in 1991 and 1992, followed by their third in 2009.

However, doubts now linger whether the Penguins can repeat their success in the coming season with their captain Sidney Crosby out on the sidelines with a concussion; it is not yet clear when the star player will be back in action for the team.

This is the 29-year-old’s third recorded concussion in his career, with his prior head injuries seeing him miss a lengthy absence from the game as he underwent recovery. “When you’re going through a concussion, you’re more thinking about, ‘Am I going to play?’ And the Stanley Cup is the last thing on your mind,” commented Crosby in July about his concussion history. “It was more or less just when and how I was going to feel when I did get back.”

The Penguins are second favourites 9.50 (+850) to retain the Stanley Cup – that may have something to do the recent announcement about Crosby’s concussion – while Tampa Bay Lightning are currently odds on favourites for the title 9.00 (+800). The Washington Capitals are third on the list 10.00 (+900) and the Chicago Blackhawks are fourth favourites 12.50 (+1150).

Place a wager on the home teams of the opening games and make a killing with the NHL Enhanced Odds!