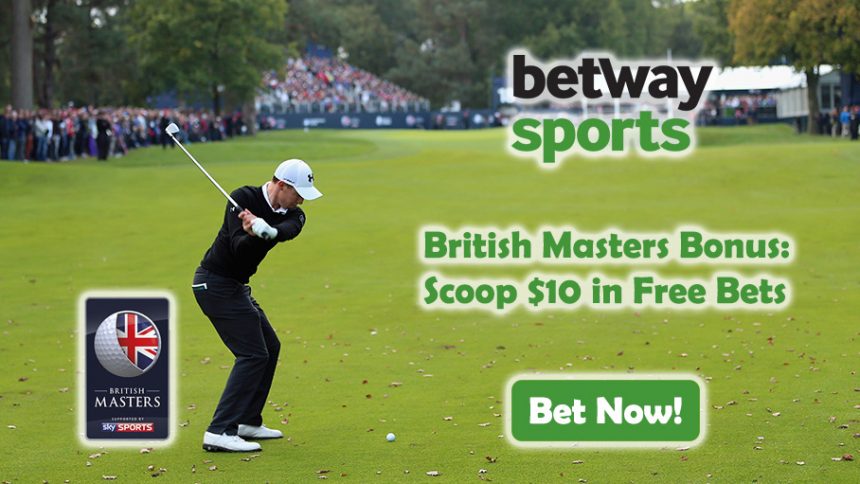 Grab $10 in Free Bets with the British Masters Bonus

Betway Sports rewards you with a British Masters Bonus on top of your regular golfing bets!

Back any player to finish as the leader in either of the first three rounds of the competition to win $10 in Free Bets with the British Masters Bonus! Make a $20 wager on a pre-tournament Outright Winner on the latest event of the European Tour, and if your player ends up on top in his first three outings, you’ll collect $10 in Free Bets!

This offer opens at the start of the competition (October 13) and ends three days later (October 16), which means you only have a short window of opportunity to capitalize on the event with the British Masters Bonus. Back your favourite player now and earn yourself an added bonus on top of your winnings.

Before the 63rd edition of the British Masters took place last year, the competition wasn’t contested for a period of six years prior to that, between 2009 and 2014 due to the organizers’ inability to find a suitable sponsor for the event, according to BBC Sport.

But when it was reinstated as part of the European Tour in 2015, the young Matthew Fitzpatrick defied all expectations and went on to win his first professional trophy with a score of -15 (64-69-68-68=269) that saw him overcome the likes of Soren Kjeldsen, Shane Lowry and Fabrizio Zanotti – all of whom ended up as runners-up behind the then 21-year-old.

Place a wager now to collect your British Master Bonus!

Fitzpatrick was recently part of the European team during the Ryder Cup, and despite succumbing to defeat to the Americans, he views this as a ‘great experience’ that will only fuel him to achieve things in the future.

“It was fantastic. It was a great experience, one that I will never forget,” Fitzpatrick commented on his first Ryder Cup participation. “Your first Ryder Cup, you don’t forget it, whatever happens. It just makes me want to be on more teams and hopefully in years to come I can make them. If I keep playing well and keep working hard, I can have more experiences like that. The 12 who were there two weeks ago could easily be the 12 in two years’ time. We have got some great players on that team.”

Place a bet on any player to finish as leader in the First, Second or Third Round, and you’ll receive $10 in Free Bets with British Masters Bonus.